It’s the end of the year and everyone is writing their year-end recaps and their goals for next year, so here goes!

Next year I have three main goals as far as sewing and quilting goes. And they are pretty big ones! But go big or go home, right? I’m going to talk about just one of them today and the other two later.

My first goal is to finish any and all sewing/quilting projects that I started before 2017. Yikes!

So in 2016 I only had one major goal: to spend most Saturday nights working on old UFOs and post progress on Instagram with the hashtag #ufosaturdays. My goal was to finish the nine UFOs that I chose by the end of the year.

While I didn’t finish all nine (or really, even get close!), I made great progress on quilts that probably would have gone untouched all year if not for this project. I think it was a success! I might have grumbled at first, but every week I wound up getting into the project and would often continue working on it a fair bit over the following week. For me the biggest problem is almost always getting started, so having something force me to get started worked out swimmingly.

I plan to continue UFO Saturdays into 2017, as I think I’m ending 2016 with more UFOs than I started! (I started a bunch of quilts this year.) I am very eager to have a much clearer mind and less of a project backlog. While I am perfectly happy to have a handful of recent WIPs around, things have gotten way out of hand the last few years.

Today I’ll post my progress on the nine quilts I worked on this year, six of which are going to roll over to next year. Next Saturday I’ll post the rest of the UFOs for next year! I think the grid is going to have to be 16 quilts instead of 9 this time. Eeek! I’m just hoping that once I do my tally it’s not actually 25!

This was my original Instagram post from January 2016 with the nine UFOs I chose to focus on: 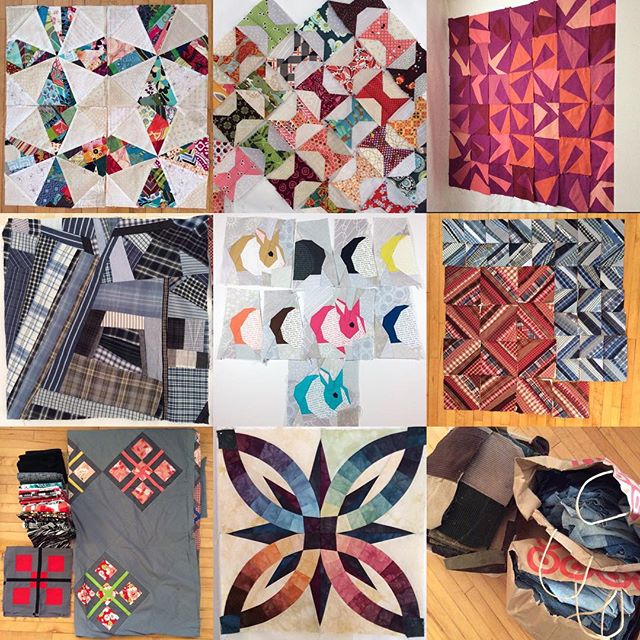 From top left, here’s my progress for the year:

I scrapped (ha!) the original plan of doing an all-over kaleidoscope because I was getting tired of making the scrappy triangles and designed a new layout. I re-cut the new pieces I need, and finished all of the scrappy fabric triangles. All I need to do on this one is actually sew the block components together. It’s a bit stalled because I’m still torn about the accent triangles–I think they look too busy but I’ve ripped them out twice now with the same thought. I’m pretty sure I’m going to wind up ripping them all out for the third time. I have a couple of ideas for what might work for the new accent color, and so one night I’ll just put on a movie and rip, rip, rip! 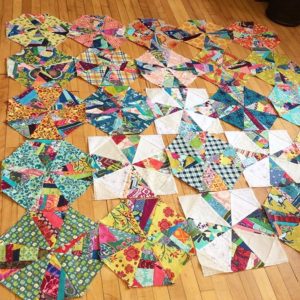 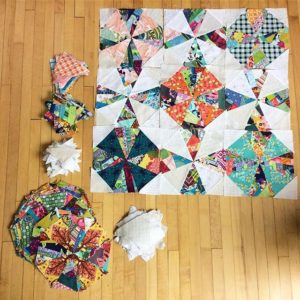 This one I made amazing progress on. I spent probably 40+ hours cutting out close to 700 different strips from my fabric stash. Each spool in this queen-sized quilt is going to be different and is going to be a fantastic snapshot of my stash! I’m super excited to finish! I’m done about 87/692 blocks, and I plan to do some every day once my machine is back from the shop. Now that it’s just mindless piecing, this one will finish up quickly. 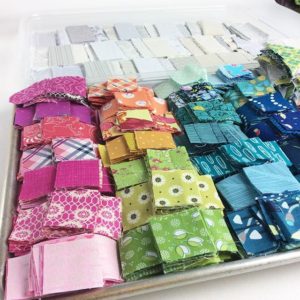 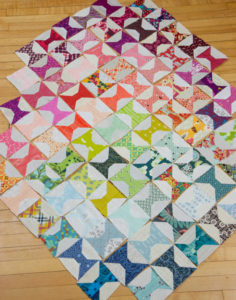 I finished the top for this one earlier this year. I signed up to take Chawne Kimber’s “Improv hand quilting” class at QuiltCon 2017 and I’m waiting until after the class to start improv hand quilting this one. I’m counting this quilt as done for this project. 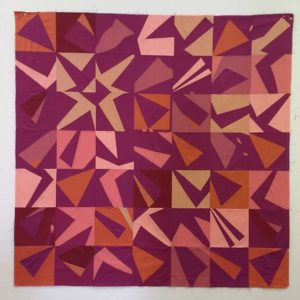 I did work on this but only a handful of times over the year. I’m happy with the direction it’s going but it’s very messy and time consuming (though super fun!) so I don’t pull it out as often. 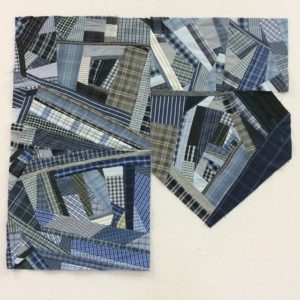 Done! And gifted to my daughter. 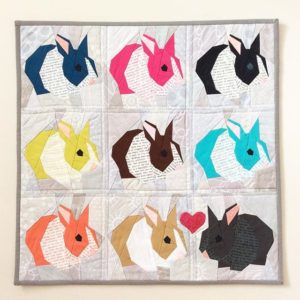 So this one I decided I was just not excited about anymore. I took the blue string blocks and repurposed them into what I’m now calling my Stalagmite quilt. It will eventually be a gift for my middle son, who loved the cave exploring we did this summer. I am still undecided as to what to do with the red plaid string blocks from the original Orca bay plan, but since my son’s favorite color is red there’s a good chance they’ll wind up on the back of this somehow. I’m done 100 out of either 200 or 400 blocks for this quilt (it will probably be 400, as that will make it a twin). 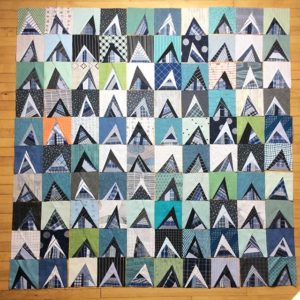 This top is made from blocks I got in a block swap many years ago. I already had finished the top. I decided I just didn’t love it and passed it along to our guild’s charity committee. So I can cross it off my list as done! 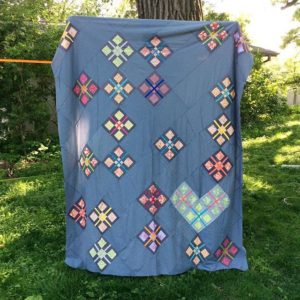 This quilt has definitely been around for just too long. (I started dyeing the fabrics for it in 2011.) Last month I finished all of the blocks at retreat! But right now the outer edge is scalloped and I don’t think I like that. To straighten the edges I need to dye some more background fabric, find the templates for the outer pieces, and piece them together. So it’s definitely waiting for a day where I have most of the day to work on it. But it’s getting so close! 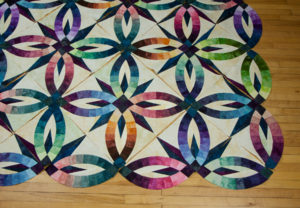 This quilt was originally going to be just one quilt with corduroy on one side and denim on the other. I decided to split it into two quilts and finished the denim top much earlier this year. I plan to tie it with a flannel backing but have stalled because my back is kind of dreading sitting on the floor and tying it. The corduroy quilt requires a zigzag machine and most days I’m just waaaay too lazy to feel like dragging that out. 🙂 But this is the year I’ll conquer it! It is my oldest UFO and that will be fantastic to get done. 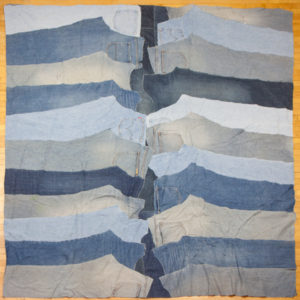 That’s it for now! Stay tuned to see the list of all the quilts I started but then stalled on this year. More UFOs on the way!