I think most quilters, and people who sew in general, have a lot of thread. If you are like me, thread organization can be an issue. I had a big problem with organizing all those bobbins for a long time.

I was reading a forum thread where some people said they only had 6 to 12 bobbins. I am sure many people are happy with that number, but that would drive me crazy (I have over 100). Shortly after I bought my machine, I bought a bulk package of generic bobbins for my machine on eBay. I like to have my top and bottom threads match, and I hate wasting thread, so I prefer to have a bobbin for nearly every color of thread I own and never have to unwind one. I realize I am probably in the minority here, but maybe there are others like me.

For people that only keep a few bobbins around, you have to find a way to use up the bobbin ends:

In any case, no matter how many bobbins you have, two things that are frustrating to me are the thread coming unwound off the bobbin (and getting snarled with all the other bobbins), and digging through bobbins to find the one that matches the thread you’re using.

There are several products, and some clever free or almost free hacks, to prevent your thread from coming unwound from the bobbin. Products include:

A couple of hacks I found online I thought were quite clever:

Julia from Stars and Sunshine uses clear plastic tubing from the hardware store, cut to the height of the bobbin. She uses 3/8 in. ID (inside diameter) clear tubing and explains the process (and a bunch of other thread organizing tips) in her post.

Kim from the Sassy Crafter also uses clear plastic tubing, but a larger size (3/4 in. ID) that holds the entire bobbin, similar to the Bobbin Saver above. She explains how to construct these tubes in her post.

If you want to keep your bobbins with the corresponding spool, you can:

If your pegs aren’t long enough, then you can make your own peg holder.

This one, from Kate at Katie Mae Quilts is made out of pegboard and dowels and is shown on a wall, but would also work on a table or in a drawer. You could also cut a piece of pegboard to fit in a decorative frame. 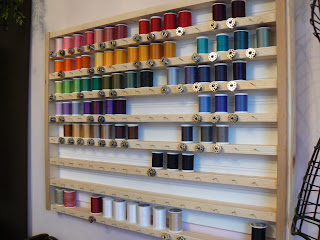 This one, by Heather at The Creative Homemaker, keeps everything neatly on the wall.

What do you use to store your bobbins?