So, this year I decided to give my parents a quilt for Christmas. I actually finished it a couple of months ago, but only got around to photographing it last week. It is around 60″ square. 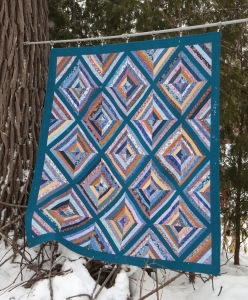 So this quilt actually has a bit of a story. My Grandma was a quilter. Unfortunately, just as I was starting to get into quilting, she found that she couldn’t really do it any more. We did talk about quilting some, and she did see some of my earlier quilts, so that was really nice. She passed away a couple of years ago and I inherited her fabric stash, notions, and her sewing machine.

My Grandma made me and my brother both quilts for our weddings. (I will post a photo of mine at some point.) I know she made a few more quilts, including one for two out of three of her children (my Dad’s brother and sister). She never got to making a quilt for my Dad (her middle child), and I know he and my mom were disappointed about that.

I thought maybe I could make them a quilt from my Grandma’s stash. Only a couple of issues: my Grandma had almost nothing but traditional small prints and calicos, and my parents are of the variety that if I give them something “too nice” they’ll never use it. I purposely chose a small size so it could be a throw that lives on their couch and I purposely chose a non-fussy or precious pattern so they would use it.

I had recently attended the Minnesota Quilter’s “schoolhouse meeting” where one of the stops was Mary Pozzini showing us how to make Heartstrings quilts for charity. I really loved how the quilts were so lovely, even though when you look closely the fabrics were mostly kind of ugly! But my Mom isn’t a huge fan of red, so for the heart I chose one of the new Kona colors, “Celestial”, which is a pretty teal-ish dark blue. I used some thin solid pale pink from my Grandma’s stash as the foundations. While adding the strings, I was careful to have a value contrast between each one, and I think that makes the quilt sparkle a bit. 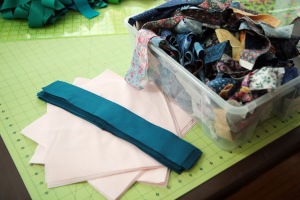 Anyway, for the back I also wanted to do something special. This summer, while I was visiting them up in Calgary, my Mom gave me a linen tablecloth that she had bought when she and my Dad were first married. She hadn’t used it in many, many years but I could tell it meant a lot to her. It was really soft from age and washing, so I decided to use it in the back of the quilt. It was a little small, so I decided to try making a border using the glass tile look/idea I had a long time ago. That border is not a print–it is 1296 1″ finished squares! 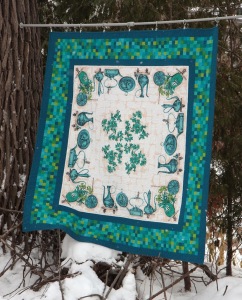 The border was not as hard as you’d think. I made that first inner blue border so that the size was an exact number of inches. I cut a lot of strips (I did the math beforehand to figure out how many I’d need), and strip pieced all of the strips in random order into sets of 6 strips. I cross-cut these into 1.5″ strips, and then mixed and matched to get the right number of 6×6 blocks. I assembled these into blocks, and then laid them all out to get a good arrangement. Because I was careful to alternate pressing directions, I used almost no pins for the assembly and everything lined up really well. The back has inspired me for a future design, too 🙂 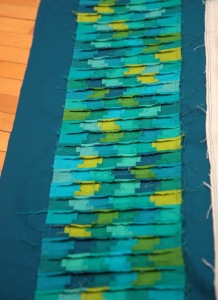 Anyway, I have yet to hear back if they like it (it was travelling back to Canada with relatives and has not been delivered yet), but I am thinking they will. It was hard to let that back go! I will have to do another glass tile quilt someday.