So the last few weeks were perhaps not as productive as I’d hoped. The last straw was trying to find something in a very large, messy closet, and losing several things that I *knew* were in the basement somewhere. We decided to completely declutter the house, and that has been swallowing up almost all of my time and energy.

I have moved around a lot in my adult life, and always kept the stuff at a reasonable level, knowing I was living in small apartments and would have to move it soon. We have been in this house now for 5.5 years (the longest I have lived anywhere as an adult), and with three small children and all the time that takes and clutter that brings, we have been very remiss on keeping on top of things. We are trying to get everything done so that we can have a nice calm summer, so just three weeks left to get rid of it all.

Anyway… I have been working on a few small things.

My MQ challenge. Not impressed with this one. My original plan was pretty much an epic fail. I picked something that was just too fiddly. Super inset seams + tiny pieces + being lazy and attempting to machine stitch instead of English paper piecing + little skill at precision piecing = disaster. I then came up with several other ideas, none of which worked either. So, I just cobbled something together based on my plan for the back of my Supernova quilt and called it a day. 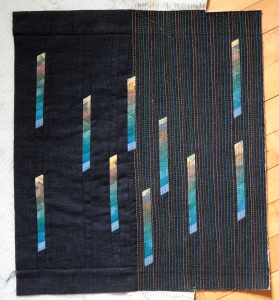 It is a little flat and boring, even though I am trying to add some depth with the quilting. I have always wanted to try 1/8″ straight line quilting, but always thought it would take too long and be too stiff for a whole quilt, so I am trying it here on a 12″ mini. In 6 different thread colors. I might not be so excited about that after my 71st thread change… I think I might wind up adding a little “broderie perse” after I’m done quilting because I just can’t stand how boring it is! 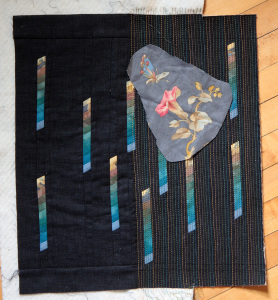 A few weeks ago, Lisa (from PixieSpit/Fresh Stash) made me aware of the existence of Prepared for Dyeing (PFD) Essex Linen (55% linen, 45% cotton). She only had 3 yards left, and then I ordered another 2 yards from Fabric.com. Apparently it is backordered until July, so I am lucky I got some when I did!

I dyed a 24-step color wheel in fat eighths using lemon yellow, mixing red, and navy. So pretty! I weighed the linen and it weighed about 25% heavier than Kona PFD, so I upped the weight of the (procion MX) dye by 25%. If I had to do it again, I would probably do more like 50-75%  more as it seemed a little washed out. Also, the navy backstained the yellow to red blend, even though I let it set overnight. So maybe linen doesn’t hold the dye as well? I don’t know why that happened. So I have to re-do that 8-step blend. Sigh. 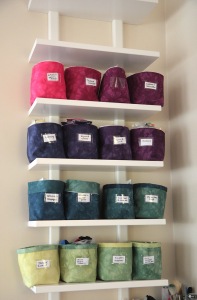 Anyway. I have this shelf in my sewing area that looked like it was going to be so useful when I got it at Ikea, but was being highly non-functional and cluttery, and I had been thinking that the little buckets that I made at retreat were about the perfect size to hold crafting bits and bobs like zippers, fabric paints, and fancy threads. And by some happy coincidence, there are six shelves, which each hold 4 buckets… and I had 24 fat eighths of linen.

So now I have a rainbow shelf of buckets holding all my crafty notions that were previously spread out over four different closets. I still have to finish the yellow/red blends and the rims/binding, but they are already in use. I am really liking this. I have already saved so much time by just being able to grab a bucket rather than having to dig around upstairs for something. The linen is really nice–I fused woven fusible interfacing to both the linen outer shell and the cotton lining and it gave it about the perfect weight and stiffness. The buckets I made at retreat out of just cotton were much floppier.

I also got really annoyed with Alfred’s ghost quilt the last few weeks. I finished all the blocks, but the sashing that I chose was just not working for me. I spent a couple of hours fooling around in EQ and came up with something much, much better. I am extremely excited about this one. Destined to be a pattern for sure. I want to finish it for my show and tell for the June guild meeting (June 13), so I had better get going on it! Here is a tiny peek at the ghost fabric. 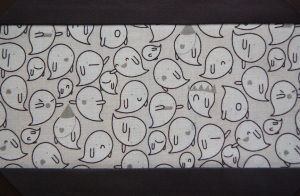 I just started on my annual tradition of sewing matching dresses for Johanna and her cousin, who is just under two years older than she is. The last few years I have been extremely disappointed with the fit of girl’s dress patterns from Jo-Anns (I think Simplicity was the worst), so I am going back to my Japanese dress book, Simple+One (isbn #978-4-418-05124-3). You can see a preview/review of it here. I am making the simple dress on the cover and the tiered dress in the second photo down on the review. I made the tiered dress a couple of years ago, and the finish and fit were really good. 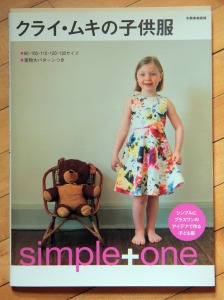 For the simple one from the cover, I chose Joel Dewberry’s Pristine Poppy in teal paired with Tartan in aquamarine for a contrast band at the bottom of the dress.

For the tiered party dress, I completely copied Cotton Candy and chose Children at Play by Sarah Jane/Michael Miller. It is so sweet and pretty! I could only find one place that had any left, so I was lucky! 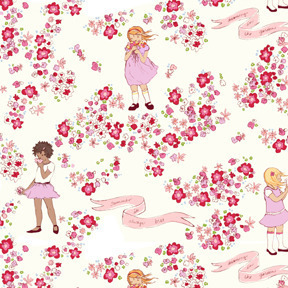 Now I just have to figure out how to sew them from mostly non-existent directions. Sewing garments is not my strong suit, so I hope it goes smoothly!