So last weekend I went to my first retreat. I went with the Minneapolis Contemporary Quilters (MCQ) to Camp Wapo in Wisconsin. There were just the three of us from our guild tagging along with MCQ this time, but I think that more of us will be going in the fall!

So of course you always get less done than you think you will at a retreat… too much chatting and eating going on! But I did manage to do a few things done.

One of the first things I did was to make a thread bucket and a scraps bucket. My table was getting pretty messy and I wanted some to take along to future retreats and sew-ins. I mostly followed Elizabeth Hartman’s tutorial over at Sew, Mama, Sew!. I will do the pincushion and organizer at some point, but I really wanted the thread catchers right away. (Plus, I am waiting on some walnut shells from a friend.) I really need to re-do the topstitching, but otherwise I really like them!

I worked on Alfred’s ghost quilt for a little bit, but found that I didn’t have the energy to spread out and randomize the colors like I wanted to, so I didn’t get very far. These are the fabrics for it, though. 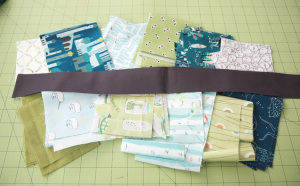 I did have a lot of fun with the “Bridget’s Bagettes” pattern. I wound up making 7 zip bags there and then finishing the last two when I got home. The kids went crazy for them and I have several to make for them now, out of their chosen fabrics. The pattern was pretty good, though with all the topstitching and the zipper it is a little fiddley. These were highly coveted at the retreat! I especially like the ones that have the birds showing through the pocket, like the one at the top left. 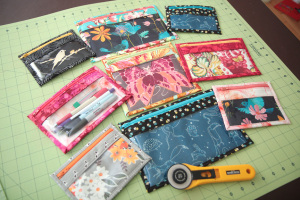 I also zipped through one toddler quilt top, destined to be a pattern. I have decided to do some patterns that are easier, but not just squares and rectangles. This one only took me about 5 hours, including cutting! It is also the first time I used Essex linen and I really like it. It makes the quilt less “precious”. 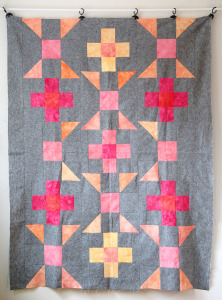 That is about it this week! I hope to be back in the sewing zone now and get a bunch done in the next few weeks. I am planning to take a bit of a break from sewing this summer and get all these patterns written up finally (I think I am up to 10 designed, 7 sewn that need writing!).