Teaching my kids to sew by machine

So, even though I really enjoy sewing and I really want my kids to sew, I had yet to teach them to sew a single stitch by machine. I tried a couple of times to show them hand sewing, but they would just get frustrated and want to quit. The last thing I want is to have them build up negative feelings about sewing so young, so I dropped it. I figured they would be more enthusiastic when their motor skills and patience are a little better.

Johanna is now 6 1/2, and Alfred is 4 1/2. Johanna has started asking to sew and Alfred has started begging. One reason I was procrastinating is that I didn’t want to teach them on my expensive electronic machine. I didn’t want them to get hurt or for them to break it. I thought of teaching them on my first machine, a cheaper Brother that I think is one of the kind you get a Wal-Mart, but the tension is very fiddly. And it doesn’t solve the problem I forsee of them pushing on the pedal too hard and sewing their fingers.

I got it in my head last week to investigate a non-electric kid’s hand-crank machine instead. I looked around on eBay for awhile, and even added some to my watch list, but they were all kind of in sketchy condition except the ones that were quite expensive. 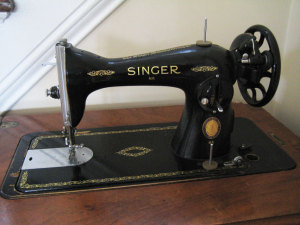 Then I kind of did a head-slap. I have a Singer treadle machine in the basement. (model 15-88) I knew they wouldn’t be able to treadle (and I need a new belt, anyway), but I had not thought of just hauling up the machine without the cabinet, and letting them use the flywheel to make it sew. I was always planning to get it sewing again, but other things had always come first. What a great time to finally do it!

So last night, Tyler brought it upstairs, and I did many hours of reading on how to clean and oil it. I even read about how to add a reproduction crank to convert it to a hand-crank machine. I ordered one and a couple other small things and they should be here in about a week. 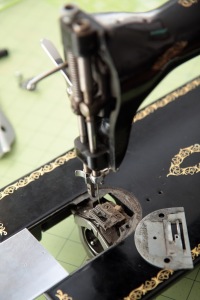 I spent this morning cleaning it. Well, vacuuming it and brushing it off. This machine is in amazing condition for being 65 years old. I talked to my Mom and she said that my Grandma probably had it cleaned before putting it away about 48 years ago. Except for being a little dusty and a little linty, the interior looked brand new, and it turns incredibly smoothly. It took me about 10 minutes to adjust the tension and it was producing beautiful stitches. Woo hoo! 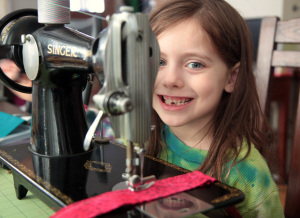 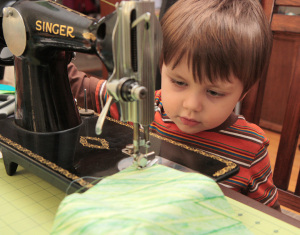 The kids didn’t want to wait for the hand crank to get started, so we spent the afternoon sewing. Johanna made a tote bag, and Alfred made a little blanket for his toys. They seemed to like it so far. I keep trying not to get too excited about Alfred’s seeming affinity for sewing, but it’s pretty hard. He was about as good with the machine as Johanna was, and he wanted to keep going for a long time. Johanna was less interested in the actual sewing, and more just excited she got a bag out of it. 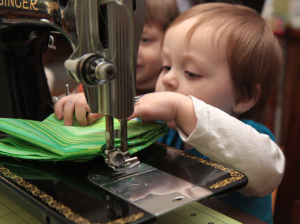 Even Emmett (2 1/2) liked turning the wheel 🙂 It was ridiculously sickening when he turned to me and said “I sewing, mommy! I sewing!”. 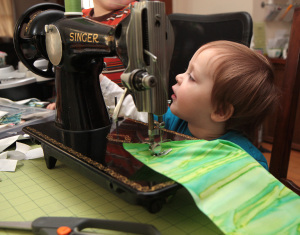 Johanna’s decline in enthusiasm at the end was probably related to how complicated she made her bag–it took awhile. She wanted four different fabrics, fully lined, three outer pockets on one side and one on the other, and one handle. 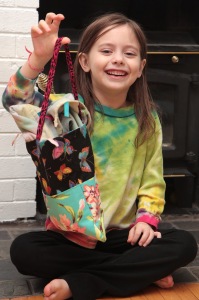 Alfred wanted to keep sewing after we finished his simple blanket, so he sewed scraps together for awhile longer to make more blankets for his toys.

And then a second head-slap later this afternoon. When I talked to my Mom about what I good idea I had by not buying a toy crank machine on eBay, she reminded me that she gave me her toy machine a few years ago. D’oh! I completely forgot. It is somewhere in the basement, which I never go down to. I really have to de-hoardify the basement and find it!

And in case you have been counting, if you add in the 20-year old Kenmore that I inherited from my other Grandma last year, I have 5(!) sewing machines. How did that happen??