I did actually get some sewing done this week, finally. I was focusing on just two projects because I am trying to finish at least one (hopefully both) to enter into the MN Quilter’s show. They are due April 19th, I think. 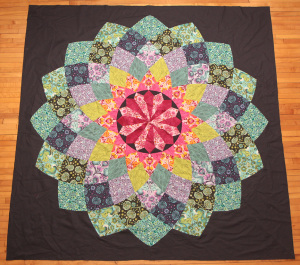 So, I finished the Dahlia top. Insetting that circle in the square was such a major pain. I saw that the template slipped a bit when I was cutting out the outer pieces, but I thought it would still work. It didn’t. I had to rip out the entire circle , take between 1/2 to 1 inch off each of the middles, and then re-sew it. Ugh. It is done now. It it not perfect, but I am not re-doing it again.

I forgot to take a photo of it finished before I ripped out the center again. I needed to rip it out because it was really not lining up right or lying remotely flat. I know some things quilt out, but this was never going to. All those thread nests in the center took almost two hours to unstitch. This week I stopped at Glad’s to get some light Aurifil 50 wt., so that should help a bit with the bulk there, too. 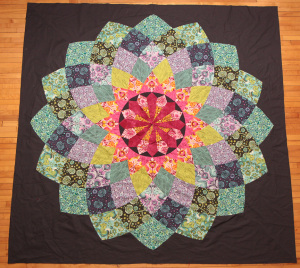 I also decided that the center looks just too flat, color-wise, and I am going to somehow add a little of the mustard back in, but maybe using the tree print instead? I’m still working on how that is going to look. I tried the flower print, but it was too busy, I think. 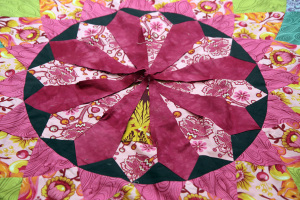 I also designed, cut, and sewed the backing for the Dahlia. Since it is such a nice quilt, I wanted it to have a really nice (though easy) backing. I also wanted to use up most of the purple Tula prints since I am not normally a big fan of purple and don’t want them in my stash. I think it turned out pretty well and I am likely to write up the pattern for it (after the 6 others that are on the list!). 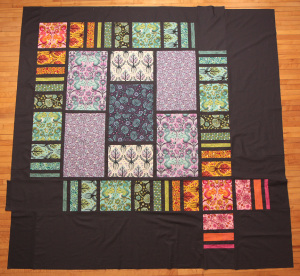 This week I got to a long overdue task–I spent an entire day tracking down the remaining Supernova block pieces that were already cut out, performing surgery on one block, picking out replacement colors for blocks that were not quite working, picking one entire new gradation, and cutting it all. All the blocks are kitted up now, so it is just a matter of getting them sewn. 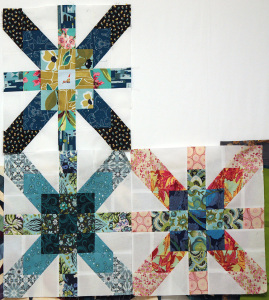 I sewed a few more of these Supernova blocks, bringing my total to 20 out of 25. I am hoping to finish the top this weekend. I still don’t know what I am going to do for the back, border, or how I am going to quilt it because it is huge (around 100″ square).