I finished the toddler pillow I was making for Johanna out of a vintage pillowcase, also from Goodwill Outlet. 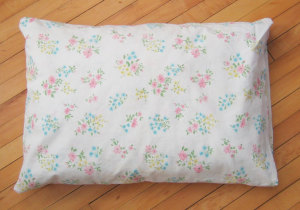 It was pretty simple to make–I cut the pillowcase in half; I used one half for the pillow itself and one half for the pillowcase. For the pillow half, I serged the inside of three sides (two short and one long) in about 5/8″ from the edges to make it a little smaller than the case. I then took a bag of poly-fil I had, unrolled the ball and tried to pull out flat-ish sheets about the size of the pillow. I think I used 5 or 6 layers. I then carefully stuffed these inside to avoid lumpiness and serged the last long edge shut from the outside. 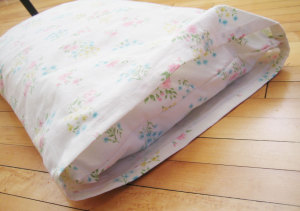 For the pillowcase, I just serged the inside three edges (two long and one short) to clean them up, then ripped out the original seam of the other short end. I hemmed/finished that short end, and that is about it!