Hand-sewn baby play mat with arches and everything

Before Johanna was born, I was looking at playmats for her and thought they were stupidly expensive, too small, too ugly, too noisy in some cases, didn’t hold enough toys, and just not what I wanted. I thought I could make a much better one. This is what I came up with: 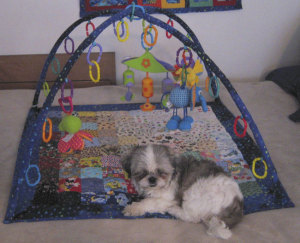 You can see that Yoshi enjoyed it 🙂 I had to set it up and take it down every day because our Boston apartment was so small that the only place we could really put it was on the bed. I have to say, I don’t miss some things about living in such a small apartment 🙂

I got a pack of 100 “I spy” charm squares off ebay and roughly arranged them by value. I bordered, backed, and bound it in a fun blue polka-dot batik, and covered the arches with the same. I made many hanging loops on the arches so that it is very customizable and could be rearranged daily if I wanted. I got a few more hanging toys after this photo was taken. 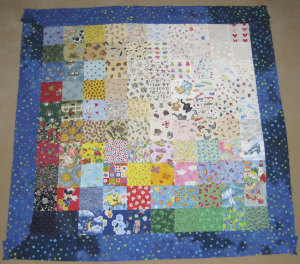 Except for the corner pocket/mechanism to attach the arches, it was pretty simple, too. Those stupid corners took me several hours to figure out, though. I do not want to have to do that again! This was technically the first quilt I ever finished. I used two layers of batting so that it is extra soft, as well. I think I wound up making it 36″ square or so, but I can’t remember. Most of the store-bought ones are a fair bit smaller than that.

Johanna really liked it actually, and played on it daily for her first four months or so. It made me much happier than the ones you can buy. It is one of the few things for her I actually finished before she was born, so it is even more special to me that way.